History of the Palio

The diffusion of the origins of a Palio linked to the famous battle of Cassano d’Adda in September 1259, when the marquess Azzo VII Novello d’Este – lord of Ferrara and head of the Guelph army of the St. Peter’s Knights – defeated the Ghibelline team of Ezzelino da Romano, has to be traced back to partial, stereotyped and incomplete reconstructions of local historiography of the first decades of the 20th century. It is not possible to confirm the whole tradition only basing on the primary sources of information, according to which, to welcome the winning lord, the people of Ferrara would have organized festive races of foot soldiers, maidservants, donkeys and horses. The first official declaration regarding the horse races dates back to 1279 when it was decided to codify in the municipal statutes a tradition that has perhaps already been in place for some years.

The statutory dispositions actually report two precise recurrences, celebrated with horse races: one on the 24th April, the day of Saint George patron saint of Ferrara, the other on 15th August, the day of the Assumption. In the first case, the winner used to gain the prestigious “pallium” (a precious piece of fabric) while the second and the third place used to win a rooster and a roast sucking pig. In the August races, the prizes for the first three winners were a nag, a sparrowhawk and two hounds. The races were constantly run during the 15th, 16th, and most of the 17th centuries, quite often to celebrate particular events like births, weddings, visits of important people and not even the disastrous overflows of the Po river could stop the feast, which was simply postponed.

The men, women, donkeys and horse races had to be carried out on those occasions in the presence of the city authorities, according to well-regulated technical and logistical methods. The prize for the first classified was just a “palio”, a piece of fabric; to the second and the third the prizes won were a rooster and a roast sucking pig. The traditional “Palio di San Giorgio” used to be run along Via Grande (current Via Ripagrande and Via Carlo Mayr) parallel to the Po river bank, starting from Borgo della Pioppa to Castel Tedaldo (present waterworks area). It was a tradition that city associations and some countryside communities offered the horse owner a piece of cloth as a sign of victory. Other races could be held in vast green areas and the parks of the Este residences of the territory (the famous “Delizie”) together with hunting trips, jousts and tournaments. 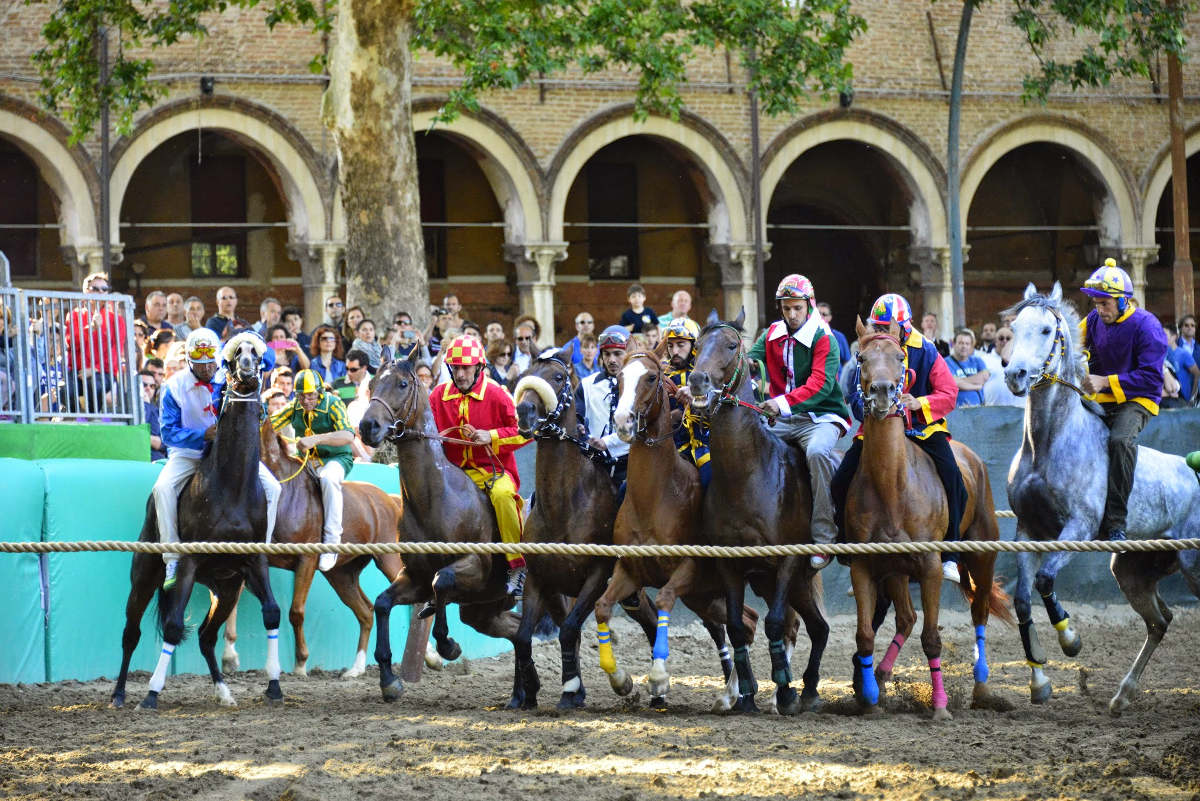 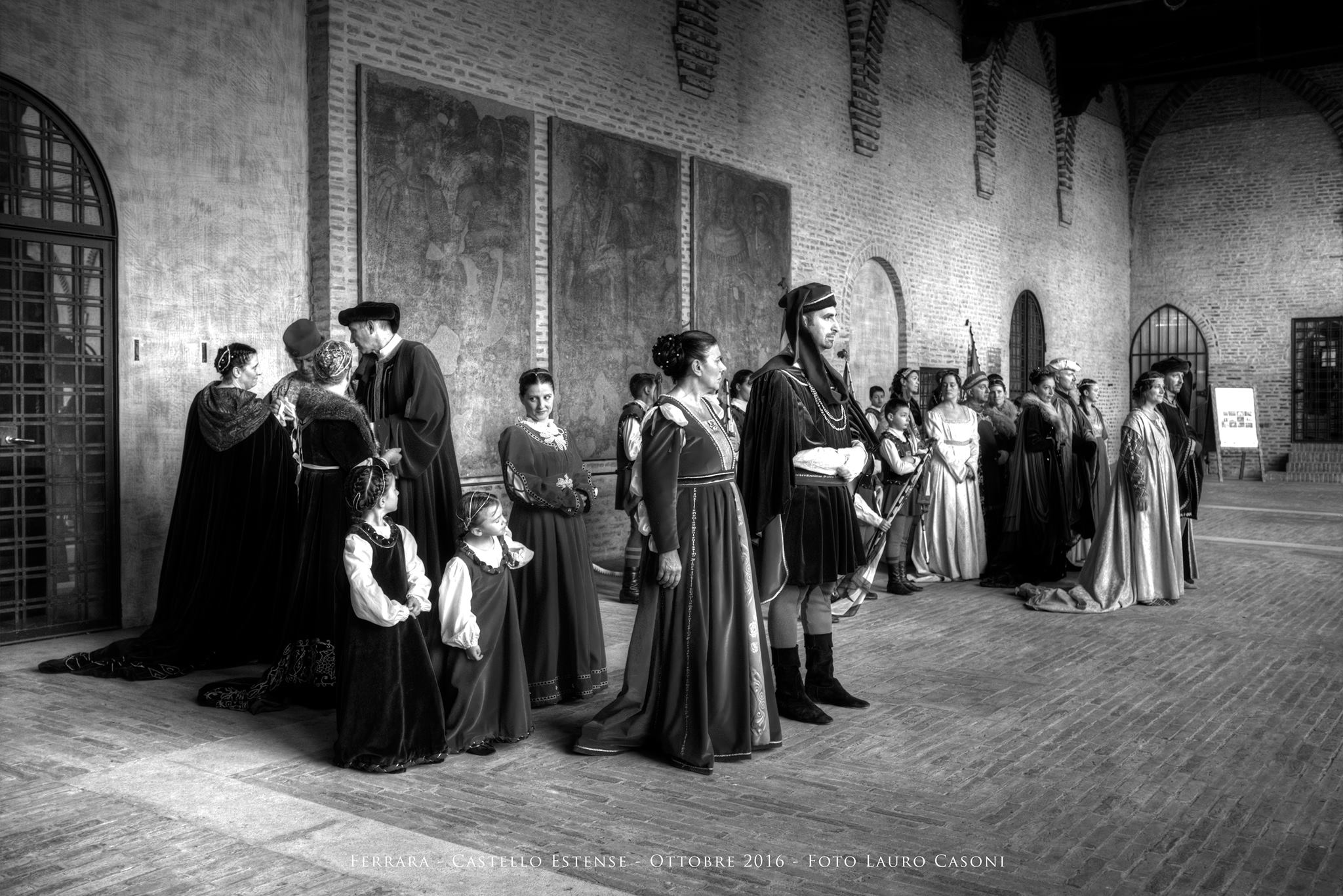 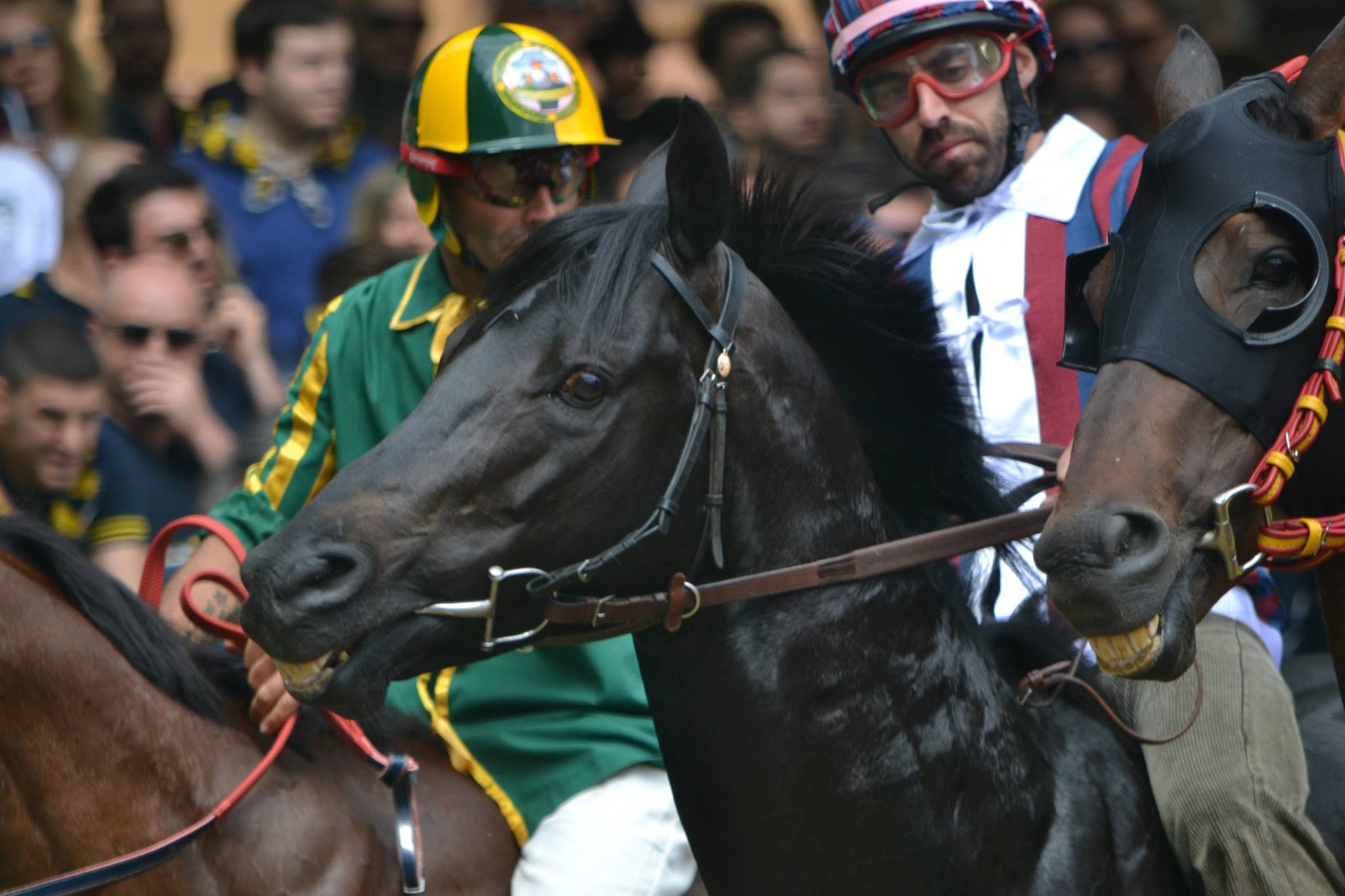 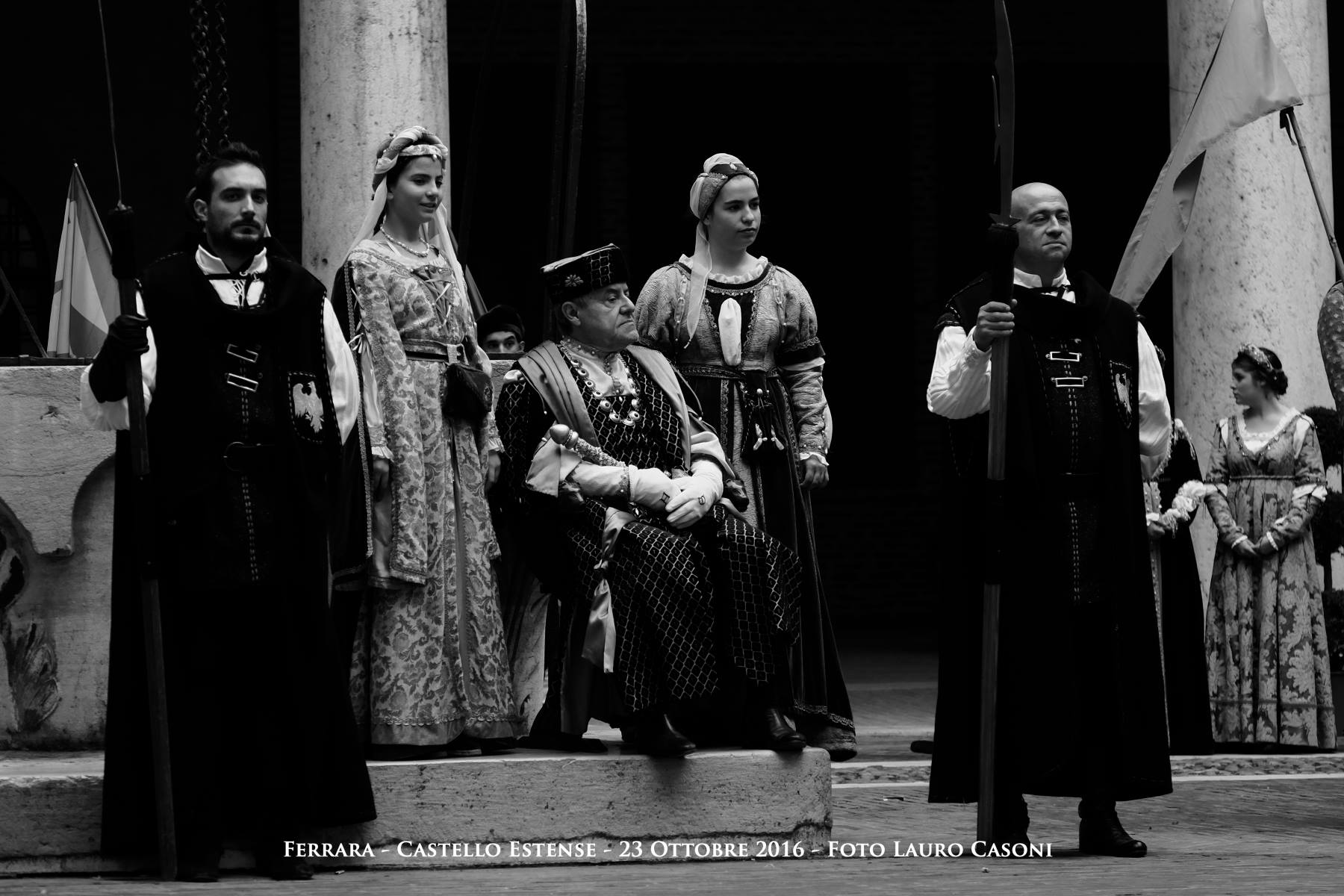 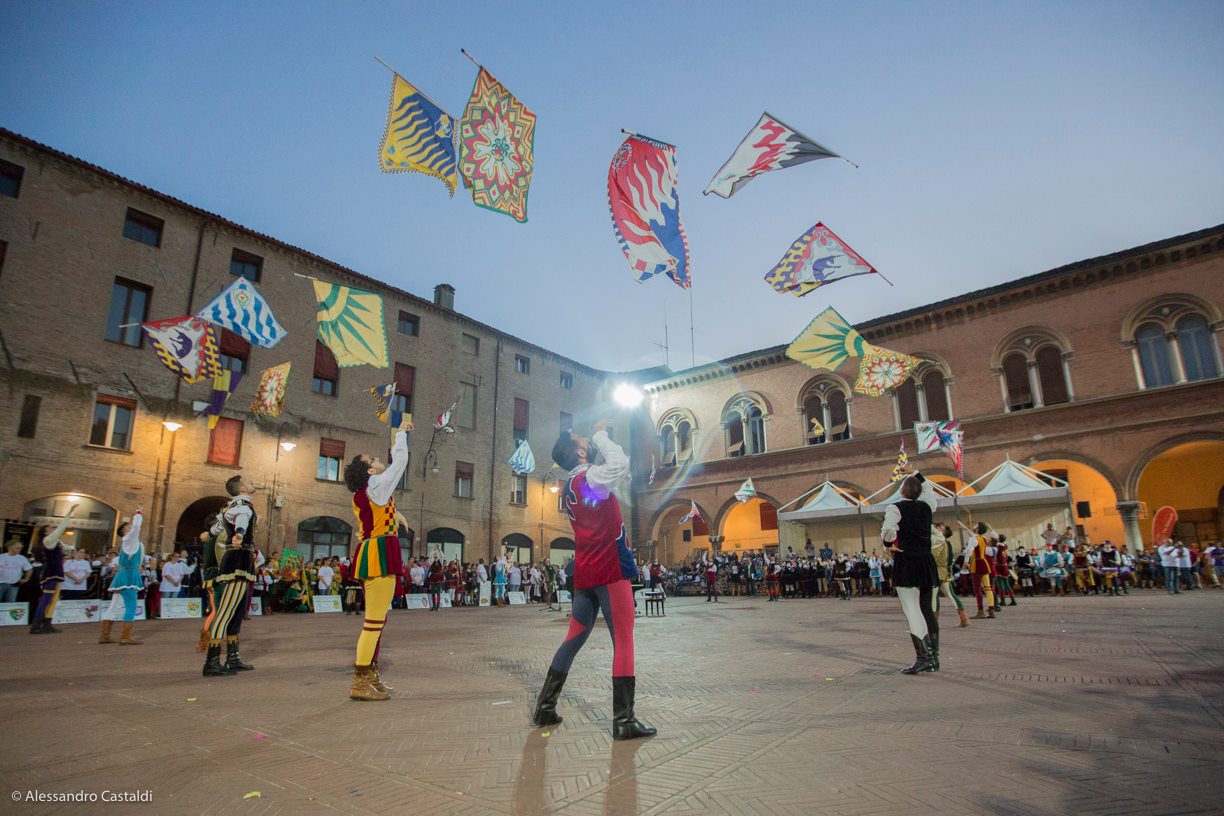 The races were resumed only in 1933 and, except for the interruptions caused by the war, they kept on giving life to the city until today.
The “modern” edition of the Palio di Ferrara takes regularly place every last Sunday of May in memory of the extraordinary Palio in 1471 celebrating the at the time marquess Borso d’Este when he received the investiture from the Pope of first duke of Ferrara. The Palio is peculiar for its type of race, which is a festive one, unlike many others that involve the use of the “Saracen” or some other enemy to beat with a spear. It is a particularly important moment for the city, that decorates itself with the colors of the Contrade, ready to win the long-awaited palio, but also to celebrate and remember the Renaissance, a time when Ferrara shone among the capitals, in Italy and Europe.

Today the races set in Piazza Ariostea on the last Sunday of May are four, as told in the chronicles and statutes of the 15th century: the green one dedicated to San Paolo for the girls’ race, the red one of San Romano for the boys’ race, the white one dedicated to San Maurelio for the donkeys’ race and the gold one of San Giorgio for the horses’. The palii are contested among the four rioni, whose territories are inside the city walls: San Benedetto (white and light blue), Santa Maria in Vado (purple and yellow), San Paolo (white and black) and Santo Spirito (yellow and green), and the four borghi, whose territories are outside the walls: San Giacomo (blue and yellow), San Giorgio (yellow and red), San Giovanni (red and blue) and San Luca (red and green). There are also flag wavers’ and musicians’ competitions, which face the representatives of the eight contrade in seven specialties: traditional single, traditional double, small team, large team, musicians,  choreography and assignment of the “combined” (sum of the best scores obtained).